Counting down the minutes until this weekend!  So excited because I get to hang out with some of my favorite girls and get our sweat on.  Which is also exactly how I spent last weekend, but I’m not complaining.

I had the privilege of joining two of my friends at City Fitness in Philly for a Thrive Training Class as part of the #MyCityMoves campaign. 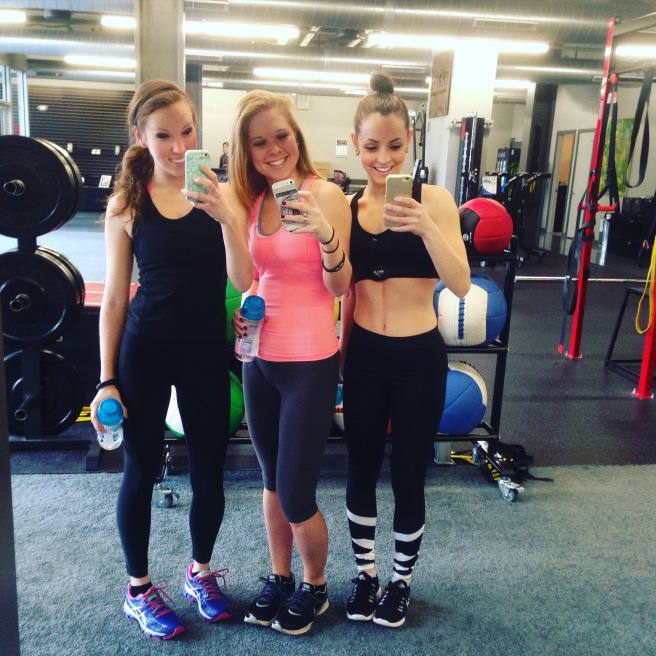 The Thrive Training session focused on training to prevent injury while also building functional strength.  We started with 10 minutes of foam rolling and stretching which really helped to activate our muscles and get the synovial fluid going in our joints.  Then we split up into groups and moved on to a series of circuits.  These circuits ranged from box jumps to speed ladder work to push-ups with shoulder taps.  We completed each of these circuits 3 times before moving on to another set of circuits that revolved around goblet squats, overhead presses, and bear crawl taps.

Then came the piece de la resistance: 6 minutes of kettlebell swings where we focused on perfecting our form and making sure we were actually doing the exercise correctly which was a huge help since I had always wondered if I was doing them anything close to what they were actually supposed to look like.  Turns out I wasn’t far off, but good lord was I feeling it the next day.

The coolest part about the workout and the #MyCityMoves campaign in general is that they gave us a MyZone heartrate monitor that tracks your effort level in real time compared to those you are working out with.

Your heart rate is calculated based on your age, height, weight, and effort exerted and it was so motivating to watch your percentage change on the big monitor.  Biggest takeaway for me is that I have a really low resting heartrate.  Like slightly concerning, but I’m not worried about it quite yet.

All in all, it was an awesome workout and I have been wearing my MyZone belt religiously since Saturday.  The best part is that it takes your effort levels and gives you MEPS (MyZone Effort Points) based on how long you are in a particular zone and compares it with your friends.  So, it levels the playing field which is awesome.

I’ve been using my MyZone belt for my runs as well and it’s been super nice to be able to see my HR percentage right there on my phone.  On my Polar and on my Garmin, it will tell me my HR, but won’t tell me what Zone I’m in so I have to calculate it myself.

But you’re probably not here to listen to me blab on about my MyZone belt.  Let’s get down to Running 101 business.  Let’s talk about proper form.

Running is a full body workout.  You’re going to be using more than just your legs and the sooner you realize that, the better.  Your upper body and core play just a big of a role as your legs in running successfully, so let’s break it down:

Here’s a helpful diagram to give you an idea of what to focus on when you get out there.

Running form is KEY to getting the most out of your workouts.  Once you figure out the proper way to position yourself, your runs will get much easier and you will avoid injury.