The week is not going quite as quickly as I would like.  I was so sure that a four day week would just fly by, but that seems to be entirely not the case.  This slow week has made me feel pretty lethargic over all, but I have gotten my workouts done.  Even if they were a little unconventional at times.

Today, I headed to the gym to do my normal running, but for some reason, I kept getting a pretty big stitch in my side that just wouldn’t quit.  I ended up hoping off the old treadmill and heading over to the bike to try to bang out some HIIT.  Wow.  I had never done HIIT on a bike before and while my hear trate didn’t quite get up to the levels it does while running, it was in the upper 160s the whole time.  After I was done, I was surrounded by a pool of sweat (more like a small lake, but who’s counting) and it got me thinking.  Why is it that completely exhausting myself is one of my favorite parts of my day? 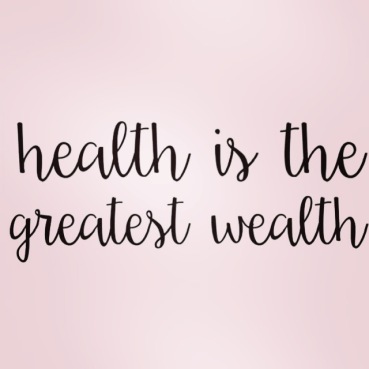 This quote popped up when I was searching around for motivation the other day and it struck a chord.  You can have all the money in the world, but what is it good for if you’re not healthy enough to enjoy it.  You dictate how you feel and how you life.  Don’t forget this.  What you put in, you get out.  So put in good things and you will be wealthier than you ever imagined.

Health has long been an important topic for me.  I get more joy about researching nutrition, new workouts, information on the body etc. than I do from pretty much anything else.  I can get sucked into a vortex of research papers and articles highlighting the pros and cons of a subject and always want to share my new found knowledge with others, so I try to surround myself with like-minded people.  My family being one of them.  My mother has always been a big proponent of working out and eating right and instilled that into my mind from a young age.  My father only more recently hopped on the fitness bandwagon, but getting to be on this journey with him is one of my favorite things.

My brother on the other hand…well, he’s a different story all together.

My brother is almost the exact antithesis of myself.  Over 6 feet tall and just a big guy in all aspects.  He swam for awhile when we were growing up, but never really saw fitness and healthy eating as a priority. I had tried for years to try and teach him a little bit about why not eating dinner and then consuming an entire family size bag of Doritos and a large soda wasn’t entirely the best idea, but it never stuck.  But recently, there’s been a shift. 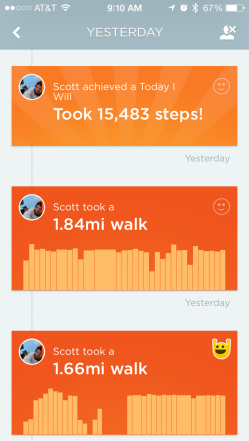 I bought my brother a Jawbone UP 24 because they were on sale on Groupon.  I received mine over Christmas and got my father and my mother one on separate occasions.  I bought my brother’s with a bit of hesitation.  Honestly, I wasn’t convinced he was going to use it, but I went for it anyway.  He let me know when he received it and thanked me, but I didn’t expect much.  Then, the next day, I was scrolling through my feed and noticed he had actually taken a substantial amount of steps.  A weird swell of pride surged within me.  As the days passed, I would check his steps almost religiously, shocked every time he came close to beating me (or more than occasionally surpassed me).   I ended up calling him out on it and asking me how he was getting so many steps and he replied “I just started watching Netflix and taking aimless walks instead of watching it in my bed”.

This made my day in ways I cannot describe.  For years, as soon as summer or winter vacation began, he would tether himself to his bed and leave every once and awhile for an occasional snack.  It was like a hibernation of sorts and I knew he was just killing himself wasting away in this state.  To see him decide to do good for himself and invest in his health is something that can’t be compared.  It’s this feeling that makes me want to maybe one day get my Personal Training Certificate.  Helping someone to realize their potential and get the greatest return on their investment for their body is something that really makes me truly happy.  I really hope he sticks with it, but, if not, I’m glad I could be instrumental in getting him moving.  Even if it’s just a few steps.